What I admire most about Kahlo’s work is her exploration of the self through portraiture. Kahlo’s self-portraits are autobiographical and psychoanalytical studies. Life events, such as her back operations and two miscarriages, inspired self-portraits of her own physical and psychological pain. Just as the modern artists exploited the portrait’s potential to convey identity, the 21st century selfie trend extends this practice to the common person, the non-artist. Exploring the selfie, and its increasing prevalence in our culture, led me to realize that there are subthemes within how people examine or present identity such as ethnic, gender, or religious identity. Selfies are an expression of one’s identity, however contrived or imagined it may be. For this reason my artwork calls attention to the ways in which new technologies allow individuals to actively voice their opinions through self-portraiture. 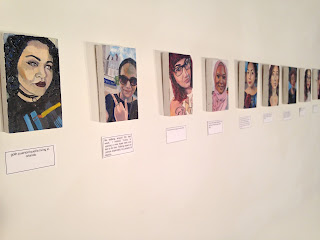 My series entitled #Latina: Reclaiming the Latina tag aims to create further dialogue outside of cyber space by engaging in traditional forms of portrait painting —namely, naturalistic representations of people rendered in oil on panel. #Latina allows exploration to discuss Western society’s view of the myth of the Latin woman and to contemplate on stereotypes. I can say all women are viewed in society as sex objects but more notably the Latina woman, she is placed under the stereotype of sexual object and described as long dark hair, tanned skin, and the body like a guitar. I also question how society has condition young women from early childhood to equate their destinies with their looks. Reclaiming the Latina Tag blog exists on the social media Tumblr and the creator has encourages woman to join her in taking back the hashtag. In other words to post selfies of a non hypersexualized image of what it truly means to be or look like a Latina. The goal of the blog is to have a safe, respectful community for all Latina women on social media. For me the blog also points out the diversity within the social construct of the word Latino.

Posted by Missartzy at 3:24 PM No comments: